Spinach and Berries Salad with Dill

Certain foods conjure up memories of friends, family, and moments in time. Some of the experiences I savor include watching my maternal grandfather cook fried bologna—possibly the only thing he knew how to cook—at their home in Minnesota. Add a little mayonnaise, and at that time in life, it was the most delicious food I could imagine. Corn bread, baked beans, overcooked porkchops, and cherry pie are intertwined with weekends spent with my grandparents on my father’s side. Whether it was a summer day, Thanksgiving or Christmas, it was the same amazing comfort food. And as the last leaves of the season dance through the yard, pozole brings back times spent with friends as the Broncos played in the background. From simple fare to culinary delights, we offer you some of our favorite recipes to try as you create new memories this holiday season. Voilà

Spinach and Berries Salad with Dill

For me, November marks the beginning of the holiday festivities. Maybe it has to do with the fact that my birthday falls around Thanksgiving, but I love this time of year. The colors are bold, the smells inviting, the tastes are rich, and the sounds are soothing. There’s nothing like sitting around the table for a big holiday meal with friends and family. At my mother-in-law’s house, we are always faced with beautifully prepared dishes that could feed a gathering twice the size of ours. We are always up for the challenge knowing that we can take leftovers home. One dish that has been a crowd favorite is this beautiful Spinach and Berries Salad. The colors are stunning, and the taste is refreshing, particularly after an extravagant holiday feast. Serves 8-10. 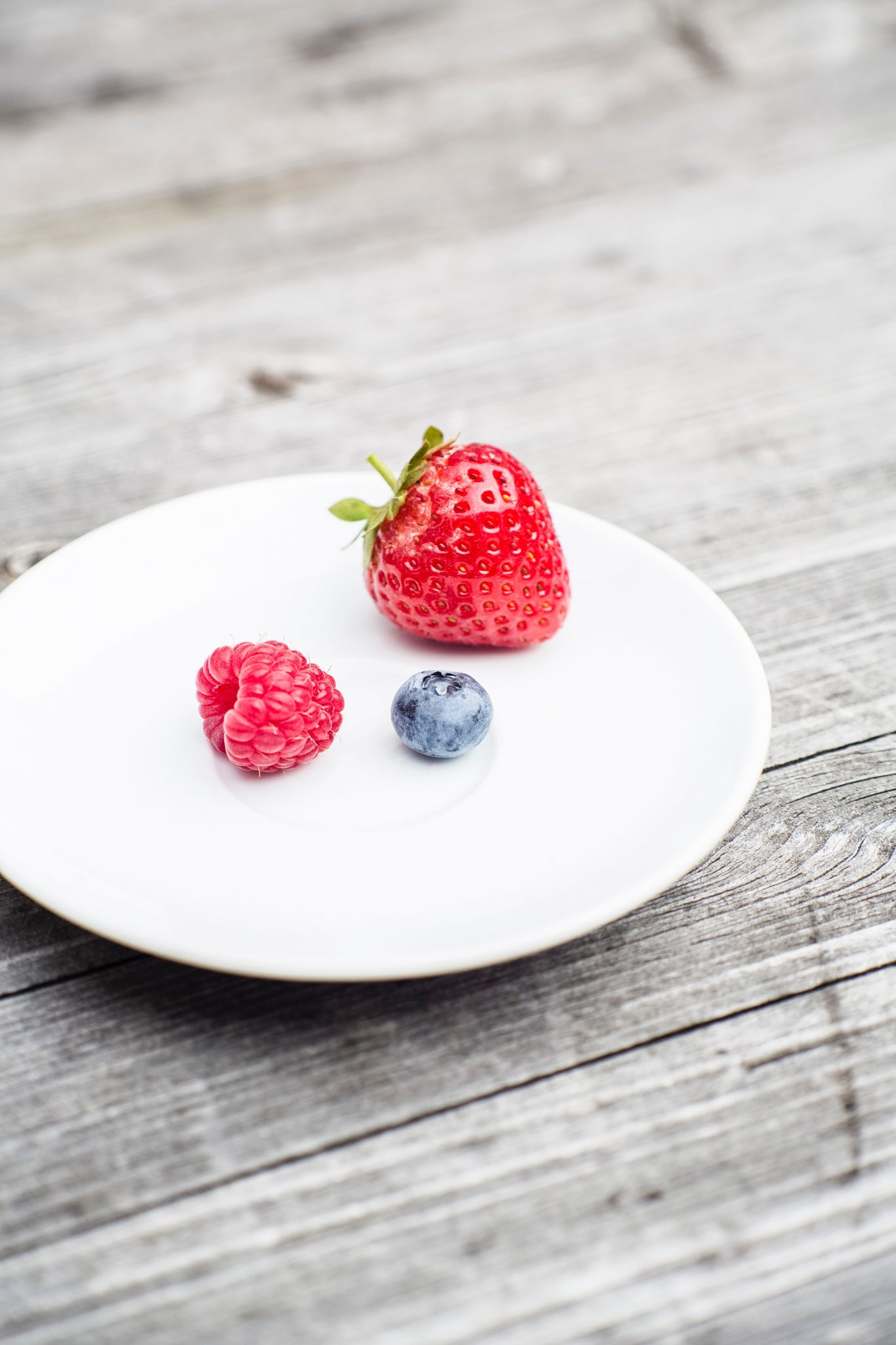 Combine ingredients for the vinaigrette in a jar with a tight-fitting lid. Shake to mix. Chill until serving time. Spread the almonds on a baking sheet. Toast at 350°F for 5-7 minutes or until golden brown, stirring after 3-4 minutes. Let stand until cool. Toss the almonds, spinach, lettuce, green onions, strawberries, raspberries, blueberries and dill week in a large salad bowl. Add the vinaigrette just before serving and toss to coat.

This isn’t a holiday recipe. It’s a meal I cook when I want comfort food. It doesn’t take much time or effort to put together. You can feed a few or a lot of people. And most importantly for me, it reminds me of my grandparents who helped raise us.

My maternal grandparents lost everything three times in their lives. The first time occurred when the Japanese occupied Shanghai. The second time after the Chinese Communist Revolution. The third time after they immigrated to the U.S. from Taiwan. And so, this was how it came to be that I had the opportunity to eat my grandfather’s delicious food, prepared with the utmost loving care. While we were challenged by my limited understanding of Mandarin and his limited English. We shared our love of food. He taught me how to slice pork paper thin by cutting the meat in a semi-frozen state. It was at his side that I learned how to transform a few simple ingredients into a feast. He showed me through his actions that if I’m going to do anything, I need to do it with mindful intention, precision, and grace. Thank you wàigōng for teaching me to love to cook but mostly just about love. Serves 4.

Combine the pork with the next 6 ingredients in a medium bowl. Mix until pork is evenly covered. Set aside. Heat a wok or large sauté pan on high heat. Add the oil and heat until almost smoking. Stir-fry the peppers and onions until soft. Add pork and sauté until the meat is cooked through. Add the water and mix to thin the sauce, if needed. Serve over sushi rice.

I think most would agree that the holidays are about tradition, so what do you do when you are hosting a holiday dinner and learn that two family members have gone vegan over the past year, one is on a paleo autoimmune diet, and one is gluten-free? You throw tradition to the wind, of course! I’m getting into a new flow this holiday season with healthy, adaptable menu options that, hopefully, will please everyone in the crowd. Following is a stuffing recipe that addresses the nutritional preferences of my vegan, paleo and gluten-free kin. I made it this weekend and evaluated it in a very small (n=1) single armed study. In other words, I used my vegan sister as a guinea pig. With her enthusiastic thumps up, I’m ready for the big time. Cheers to happy guests and healthy food this holiday season! Serves 4-6.

*Prior to preparing the recipe, cut grain-free or paleo bread into cubes and place cubes on a baking sheet. Allow bread to air dry for at least one day, or up to two days.

Preheat oven to 400°F. In a large bowl, combine butternut squash, diced apple, sliced leek, and rosemary. Toss with 2 tablespoons of olive oil until everything is evenly coated. Season with salt and pepper. 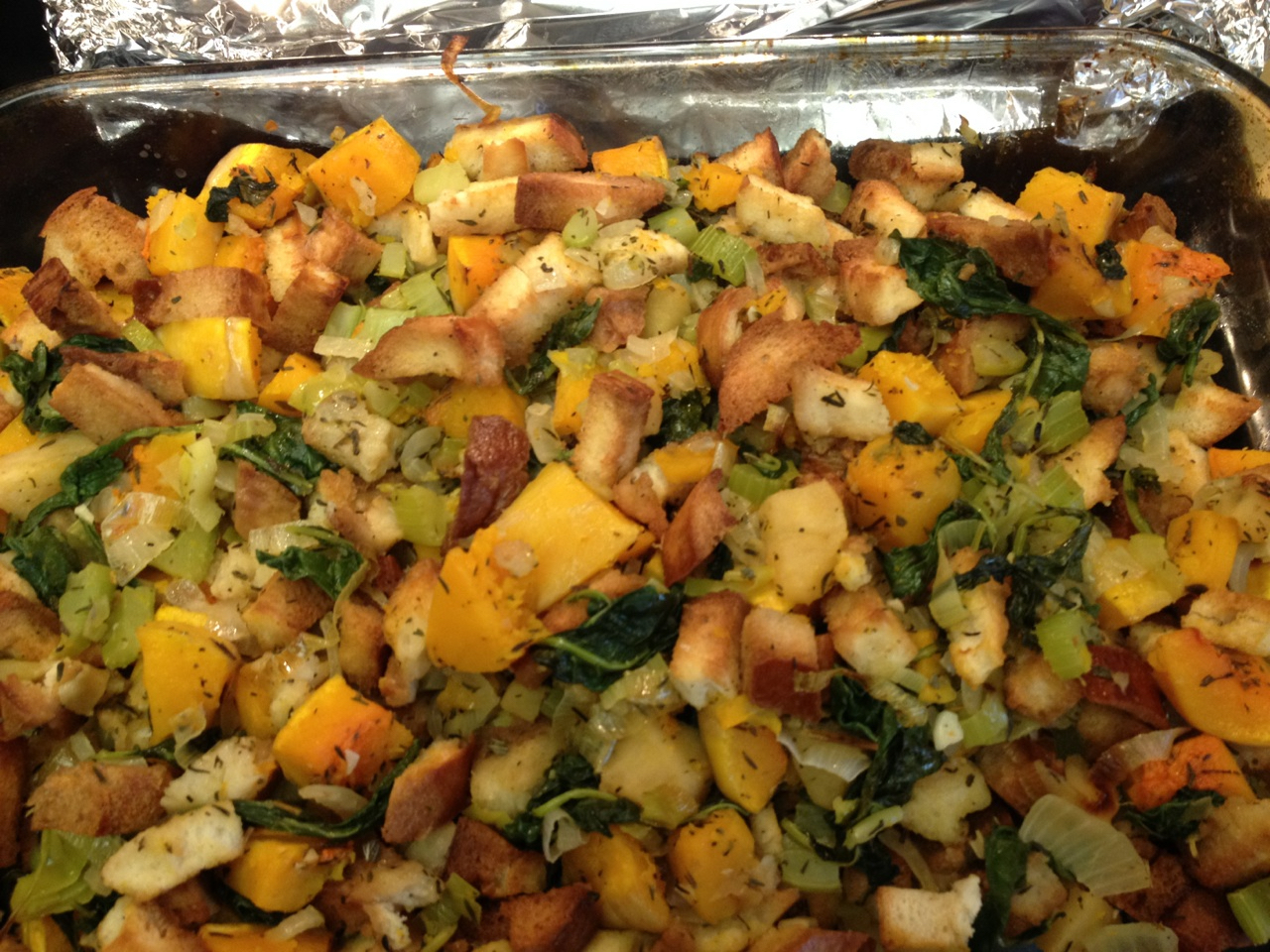 Reduce heat to 350°F. Add the remaining tablespoon of olive oil to a large saucepan over medium-high heat. Add the onion and celery. Sauté for 5-7 minutes or until tender and slightly translucent. Add the garlic and collard greens. Cook, stirring often, until the greens are wilted.

In a large bowl, combine the roasted butternut squash, collard green mixture, bread cubes, sage, and thyme to a large bowl. Mix well. Add just enough vegetable broth to moisten the bread. You may not use all of the broth. Toss ingredients together until well combined. Season with additional salt and pepper to taste.

My parents are from Louisiana, so there is often some influence of Creole/Cajun/southern cuisine incorporated into our holiday meals. My mother made a version of this dressing (or stuffing, if you must – but this is not stuffed anywhere except your mouth!) when we gathered at her family’s beach house in Mississippi several years ago to celebrate both Thanksgiving and the reconstruction of the modest house originally built by my grandfather, which withstood every hurricane since the 1960s before being stripped to its pilings by Katrina. Since then, this dressing has been featured on multiple holiday tables, usually made by my husband who now considers himself an honorary Louisianan after receiving the seal of approval from my mom for his gumbo. (Bonus points if you have fresh andouille straight from the source, but it can usually be found at natural/specialty markets.) Serves 8-10.

If making your own cornbread, this is a great thing to cross off the meal prep list ahead of time, as it’s best to let it dry for a day or two. If fresh, put the cubes in your preheated oven for about 30 minutes to dry.

Over the years, I’ve sampled many gingerbread cookies, both store-bought and homemade. Quite simply, my family and I think these are the best. I’m not sure if I love this recipe so much because these are the cookies my family made around the holidays while I was growing up or if it’s because this recipe truly produces a superior gingerbread cookie. You’ll have to decide for yourself! Makes 48 or more cookies (depending on your cookie cutters). 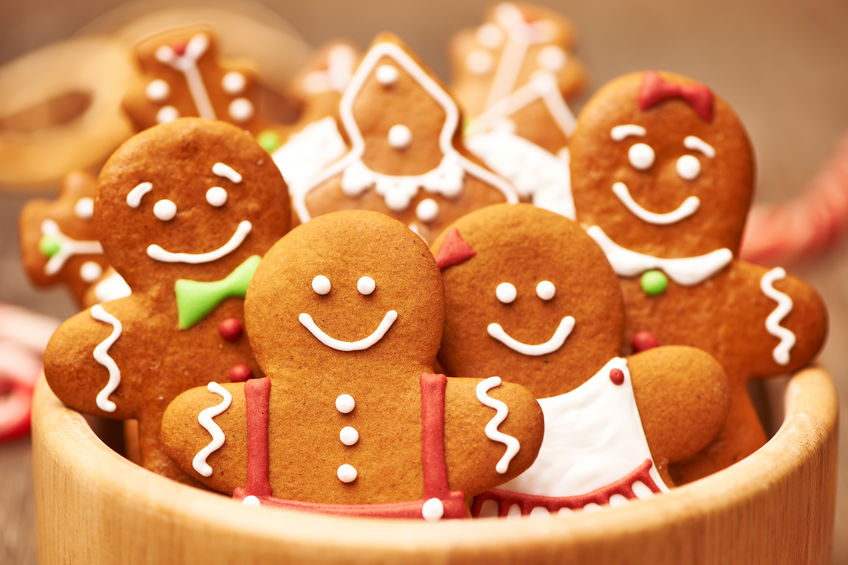 Beat butter with electric mixer on medium high for 30 seconds. Add half the flour, sugar, molasses, egg, baking powder, and rest of ingredients. Beat until thoroughly combined. Beat in the rest of the flour. The mixture should be thick. Cover dough with plastic wrap (placing plastic wrap directly on the dough’s surface) and refrigerate for at least 3 hours.

Preheat oven to 375°F. Divide the dough into halves. Roll to ⅛ inch thick on floured canvas or counter before using cookie cutters to form shapes. Place cookies at least ½ inch apart on greased cookie sheets. Bake for 5-6 minutes, or until edges are lightly browned. (Depending on your cookies’ thickness, you may not even need 5 minutes – watch them closely!) Cool on cookie sheet for 1-2 minutes. Transfer to a wire rack and let cool completely.

Decorate! Or not! They are delicious either way. My family thinks a simple powdered sugar glaze or drizzle (powdered sugar, water or milk, and a splash of vanilla) is the best complement.

On Facebook a few days ago, a friend of mine mentioned “rice apples” growing on “a still blooming tree” in the recently released Netflix show Sabrina (a reimagining of the old 90s sitcom Sabrina the Teenage Witch). While I am definitely a city boy by virtue of both my history of addresses and my temperament, my people are not so far removed from country living. My maternal grandfather was a sawyer and among my earliest memories are memorizing our address (on Rural Route #8 outside a small town in western Kentucky) before my first day of kindergarten. Having never even heard of “rice apples,” I was compelled to look them up. But instead of solving that mystery (my friend had mistyped “ripe”), I stumbled across a blog post which recreates a charmingly composed recipe from 1777 (follow the link for the original recipe and Aaron Welborn’s recreation).

Like Welborn, I noticed immediately that the recipe essentially calls for baking apples inside a rice pudding. Unlike Welborn, who was more interested in recreating the original recipe, I wanted more rice-y and more pudding-y. So, for my first go at this recipe, I combined a classic (and fairly easy) rice pudding recipe with the 1777 original. It was delicious and well received. Here’s what I did (serves 8):

Preheat oven to 350°F. Butter a 9×13 casserole dish and sprinkle with ½ cup breadcrumbs. Place the apples upright in the casserole dish.

In a medium bowl, whisk together the whole eggs plus the egg yolks along with 3 tablespoons brown sugar.

Combine whole milk, white rice, salt, vanilla bean, cinnamon stick, and lemon zest in a heavy saucepan. Bring to a boil, then reduce heat to medium low, cover, and simmer for 15 minutes. Uncover and continue simmering, reduce the volume to 3½ cups (about 8 minutes).

Remove the vanilla bean and cinnamon stick from the rice. Slowly add the rice mixture to the egg mixture. Fill the apple cores first. Then cover the apples with remaining mixture. Top with ½ cup breadcrumbs and 1 tablespoon brown sugar. Bake for one hour.

While the apples are baking, combine the melted butter, golden sherry, and ground cinnamon. Once the rice apples are ready, drizzle the butter and sherry mixture over the top. Serve while hot.